A furious row has broken out between the boss of Tottenham Hotspur and senior figures at City Hall and Haringey council over the funding of the club’s £750 million new stadium.

In an extraordinary email seen by the Standard, Spurs chairman Daniel Levy says the club has been “taken for granted” by politicians “for too long” and said Sadiq Khan’s administration has taken “such little interest” in the scheme that he feels “embarrassed.”

The message to senior City Hall aide Simon Cooper and Haringey council leader Claire Kober complains bitterly about the lack of support from the public sector and adds: “This is about trust in the politicians and officials at the GLA and Haringey, about confidence to deliver public infrastructure on time, the ability to sieze the opportunity to attract foreign investment. 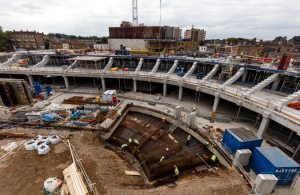 “THFC as the main economic driver of North Tottenham needs to be given the confidence to continue its £800 million investment generating 2000 jobs and it needs to be this week.”

The email does not specify reasons for Mr Levy’s outburst but it is known that there have been disagreements on funding for affordable housing Spurs must provide as part of its planning deal with Haringey council.

Another source of tension could be pledges made by former Mayor Boris Johnson and Haringey in the wake of the devastating riots of summer 2011 to provide a package of £27million in improvements to infrastructure and public spaces in the Northumberland Park regeneration zone anchored by the new stadium.

The commitments were seen by Mr Levy as key to securing the viability of the stadium scheme.

But according to Mr Levy’s email to Mr Cooper, the Mayor’s head of sport, and Ms Kober: “Actions speak louder than words and the next few days will tell how serious the public sector is in honouring its support for this massive regenerative project in one of the most deprived wards in London.”

The email, sent on Sunday morning, comes at a crucial time for the club as it negotiates a huge new loan facility with banks to fund the next stage of the construction of the 61,000 seater venue.

Spurs, knocked out of the Europa League last night by Belgian team Gent, will need to leave its historic White Hart Lane home at the end of the season while it is being demolished.

The club had been expected to sign a one year deal to play its home games at Wembley stadium before the new stadium is ready for the 2018/19 season.

The email says that the views of its bankers and non executive directors – former HSBC banking chief Kevan Watts and Ron Robson – managing director of investment fund Tavistock Group – have “hardened” because of the scale of the funding required.

Mr Levy warned “they have focused on the risks associated with the development for a company that only has a turnover of £250 million despite its global profile.” 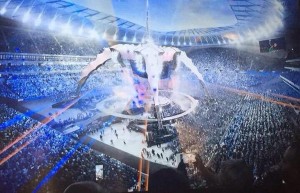 The Premier League club has already spent considerably more than £100 million on its new home and appointed financial adviser NM Rothschild in September 2014 to arrange a huge loan facility.

It had been due to be signed in November but was delayed until this week with a new deadline set for yesterday. A separate note from Mr Levy suggests that he is under increasing pressure from the club’s lenders to provide the assurances needed to keep the lenders on board.

It says: “The option to utilise Wembley for next season expires in a few weeks, the process of season ticket renewals, demolition notices etc are all reasons why the banks require certainty.”

Other funding options being looked at include a huge naming rights deal that could bring in £400 million and there have also been suggestions that Spurs parent company ENIC could sell a minority staker in the club.

The cost of the state of the art stadium – which will be the largest club ground in London – has doubled since it was originally proposed, in part because of the need to make it fit to host NFL fixtures.

The grass football pitch will be retractable with an artificial surface underneath that would be used for at least two American football games a year under a deal signed in 2015.

Mr Levy said: “As one of the biggest construction projects in London the current administration has shown such little interest to date in the social and economic benefits that I am embarrassed when I hear the words being fed to the NFL by the GLA.”

A City Hall spokesman said: “The GLA is encouraging Haringey Council and Tottenham Hotspur to secure an agreement that will ensure the successful delivery of the stadium scheme and nearby housing. This is one of the biggest regeneration schemes in London today – bringing a world-class sports stadium, state-of-the-art leisure facilities, new housing and a raft of public realm improvements that will really put Tottenham on the map.”

Haringey Council Leader Claire Kober said: “We are committed to working in partnership with Spurs and the GLA to deliver the entire stadium project, including wider benefits of improved public realm and much-needed new housing. This scheme has always been central to our regeneration ambitions and we remain committed to working with our partners to ensure that it is a huge success for the residents of Tottenham and beyond.”