Vincent Janssen has vowed to prove his worth at Tottenham after his tough start to life in England.

The former AZ Alkmaar striker has struggled to make an impact since his £17million summer move, scoring just four times in a Spurs shirt since the start of the campaign.

He last started in the FA Cup win against Aston Villa at the beginning of January and his manager Mauricio Pochettino has even admitted the 22-year-old is not doing enough to earn a place in the side.

But after missing out on a place in the squad for the game against Gent, Janssen has said he is not ready to give up on his White Hart Lane dream just yet. 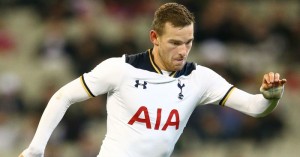 “I have given myself 12 months to succeed in the Premier League with Tottenham. And those 12 months are not over yet. The level is really high here. Up until last week we were second in the league.”

“Don’t forget I had only played one season at the highest level in Holland when Spurs bought me from AZ Alkmaar. In a short period of time I have made some big steps forward in my career.”

“I am not going to throw the towel in just because things are not going great for the first time in my career. I am jumping to put the Spurs shirt on, but I will have to prove to the coach that I deserve to play.”

“I was only told one hour before the game on Thursday that I had to sit in the stand, I was the 19th man. Obviously that message made me sad. But the manager makes the choices.”