Harry Kane scored his third hat-trick in nine games as Tottenham Hotspur reacted to their European exit by hammering Stoke to move second in the Premier League.

The England forward struck three times in 23 minutes before the break, his first a well-taken finish into the bottom corner as the ball dropped to him in the area before an exquisite half-volley with his left foot from Christian Eriksen’s corner.

Kane completed his third treble of 2017 when his low drive from Eriksen’s tapped free-kick took a huge deflection off Peter Crouch in the Stoke wall, leaving goalkeeper Lee Grant stranded.

Dele Alli then added a fourth first-half goal for the hosts, sliding in to convert Kane’s cross from the right as an abject Stoke fell apart at White Hart Lane.

After the interval, Grant made a fine save to deny Kane his fourth, while centre-back Toby Alderweireld limping off injured was the only sour note for Spurs on an otherwise perfect response to being knocked out of the Europa League by Gent on Thursday.

Stoke, who stay 10th, improved marginally in the second half but Mauricio Pochettino’s side eased to a victory that takes them above Manchester City, although they remain 10 points behind runaway leaders Chelsea. 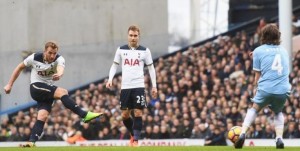 Kane now has 12 goals in 11 games in all competitions since the start of 2017, having scored his second hat-trick in a week following Spurs’ FA Cup fifth-round victory over Fulham last Sunday.

His three goals against Stoke were reminiscent of his treble in the 4-0 win at home to West Brom on 14 January, the 23-year-old’s expert finishing helped a precise and pacy Spurs dismantle limited opponents.

He took ruthless advantage of Ryan Shawcross’ inadvertent flick to fire Spurs ahead on 14 minutes, while his second showed superb technical proficiency as he hooked in Eriksen’s delivery with the ball going away from him on the edge of the area.

That strike took Kane to 22 goals in all competitions this season, the third consecutive campaign in which he has surpassed 20 goals, remarkable consistency that makes him indispensible to Spurs’ future.

Stung Spurs show the way
Alli’s goal might be described as an act of redemption following his reckless red card in Thursday’s Europa League exit, but it capped another fine performance by the 20-year-old midfielder.

His desire to impress characterised a Spurs side clearly looking to remind observers of their actual and potential qualities after that insipid Wembley showing.

Pochettino’s use of Walker and Ben Davies as wing-backs stretched Stoke to breaking point, while Eriksen was at his influential best, becoming the first player to 10 assists this season in the process.

They may fall short of challenging Chelsea this year, but the manner in which Spurs can use the same formation to torment sides suggests they could go toe-to-toe with their London rivals in future campaigns.

Stuttering Stoke
With Stoke 11 points clear of the bottom three, Mark Hughes’ side have been all but certain of avoiding a relegation fight for some time now.

Yet this defeat was a chastening reminder of their limitations.

Central midfielders Charlie Adam and Glenn Whelan were completely left behind by the pace of Spurs in the first half, offering no protection to their back four and having to resort to simply hacking down their midfield opponents.

Both were wisely withdrawn by Hughes before either could receive a second yellow card that often seemed imminent, while Joe Allen was ineffectual following his recent good form and at fault for not closing down Kane for the striker’s third.

Without the spark provided by Xherdan Shaqiri, absent despite being declared fit for this game, Stoke were bereft of ideas going forward too.

They might look enviously at West Brom, whom former Potters manager Tony Pulis has steered to 40 points by February, perhaps suggesting Stoke have stagnated this season compared with their fellow mid-table sides.