Welcome back to the 90’s my fellow Tottenham fan’s survivors or our bleakest period… or welcome to it should you be experiencing these feelings for the first time.  Yes, sadly, we are back there.  Hopefully for the short term but we are there none the less and so we all have to work on our coping mechanisms.

I was born in 1983 and by 1991 after watching us lift the FA cup I was a Tottenham fan, hooked.  Paul Gascoigne and Gary Lineker two of my heros from the Italia90 World Cup and both Spurs men.  We were all set to be a great team and have a period of prolonged success.  I was wrong.

What followed were years of mid table mediocrity at best with a few relegation near misses thrown in for good measure.  I am sure younger fans reading this may find that hard to imagine with Spurs; a mainstay of the Premier League etc however nope we were really quite crap at one point. 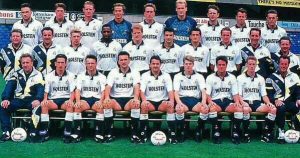 How many of the guys in the image above can you name?  Total side note but diversity in our game has come a long way already since the 90’s…

So as many would have guessed this is a tongue in cheek blog really where when things are all a but crap I revert to humour to mask real pain and that is what I am doing and that boys and girls is how we deal with Tottenham right now.  There is nothing we as fans can do, literally thanks to COVID we cannot even show up and be the 12th man … we are, possibly for the first time in our clubs history completely out of the equation.  Its an odd feeling but at the same time it also means we are looking at the management (of the club as much as the team) and the players.

In the 90’s we were just so consistantly inconsistent it was crippling to be a fan.  Ever heard the expression; ‘its the hope that kills you….’ well I cannot prove this but I believe the person who first said that must have been a Tottenham fan.  You see we would be great and beat a team and you would be excited and then we would get destroyed in the next game and you’d wonder if it was even the same players playing they looked that different.  HELL I remember some games where it was that way from first half to the second half.  Anyone remember beating 10 man Man City at half time for them to come back and win it in the second half in the FA cup?  We were 3-0 up…. we lost 4-3 …. this was before Man City were owned by billionaires by the way and it was not long after this they were relegated and dropped out of the football top table.  Amazing really how bad we were.

The only thing you could rely on Tottenham for in the 90’s really was a laugh.  You had to laugh.  Its like Harry Kane putting the ball in the net four times against Sheffield United but only scoring once and them having four attacks in the whole game and scoring three times.  You have to laugh or it will drive you insane!! 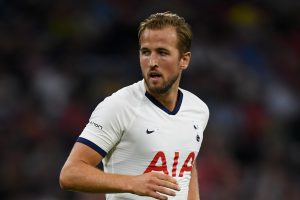 Now do not get me wrong, I seriously doubt Kane finds it very bloody funny, nor any of the current crop of players who are used to feasting at Europes top table not battling hard to maybe scrape a Europa League place however that is our reality.  In the 90’s any kind of European football was so far away I remember a couple of seasons where we were forced to enter the Intertoto Cup.  Anyone else remember that sh*t show?!

Want another laugh at the 90’s expense?  Well who knows cockney rhyming slang? …. if something is Pony, which is shortened from saying pony and trap… you are saying its crap…. well in the 1995/96 season Tottenham’s kit was made by a company called Pony who decided they would slap their name in big letters across pretty much all of our merchandise.  So, at whatever age I was I walked around with a coat that on the front said Tottenham and on the back basically in big letters said crap (well said Pony).  You couldn’t make it up …. oh and we were not awful that season.  Not good, by no means good but a solid… kinda crumbly not awful.

Alan Sugar was our chairman and bless him he saved our club.  I know many have opinions on him and thats fine but he did literally stop us from going bankrupt, saved us and then delivered us to ENIC who purchased us from him.  (did you know Roman Abramovich was all ready to buy us before spotting Chelsea and thinking it would be a better option, was cheaper too).

ENIC, in their tenure have not delivered trophies – much discussed no need to discuss further – but what we have seen is a change in the stature of our club.  We have a world class stadium, world class training facilities and we have for many a season now been a competitive football team on the pitch.  Not once faced a relegation fight, normally top half of the table and as I said in recent seasons (thank you Poch) been in the Champions League and not looking like occasional tourists in the competition but like we actually belonged there – hell we even made the final last season.  Last season feels a LONG time ago now doesn’t it!?

SO here we are.  Best stadium in the world, best training facility in the world, one of the worlds top ten richest clubs, one of the most successful managers in the history of the game, the best striker in the world, world cup winning captain in goal and yet we are getting turned over easily by Sheffield United.  If you cannot laugh at that then I dunno what to say.  Its bonkers!! its ridiculous.!!  It’s Tottenham!!