Dele Alli has opened talks over a new deal at Tottenham.

The England superstar is set to smash through the £100,000-a-week barrier and catch up top earners Harry Kane and Hugo Lloris.

Dele, 21, only agreed fresh terms a year ago and is tied to the club for another four full seasons.

But despite that, Spurs want to keep one of the Premier League’s biggest stars happy and reward him for his progress since arriving from MK Dons just over two years ago. 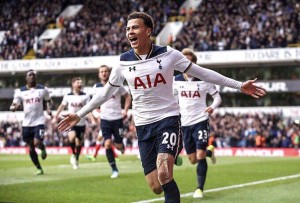 Since breaking into the first team, Dele has had two contract extensions and is widely reported to be on £50,000-a-week.

But with Europe’s elite clubs monitoring him, a new deal will make sure he is settled as the North London side move into their new stadium.

Dele is also understood to be considering a change of agent from Impact Sports Management, who negotiated his last contract.

His family will help with a new deal but Dele has more than a year left on his rep agreement with Impact — and the FA are clamping down on players changing agents mid-contract.