Kane scored twice in three first-half minutes when he beat Hull goalkeeper David Marshall from the edge of the box and then tapped in from a Kieran Tripper cross.

Dele Alli added a third before Victor Wanyama headed in after the break to cancel out Sam Clucas’ consolation for the relegated hosts.

Alli then sent the prolific Kane clear to beat Marshall for his third with 18 minutes to play.

It took the 23-year-old striker to 29 goals for the season, his highest tally in a league campaign.

Defenders Ben Davies and Toby Alderweireld completed the rout with late goals as Hull exited the top flight with a whimper. 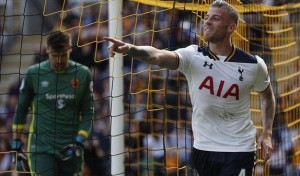 There may have been nothing to play for in terms of league positions, but Kane was determined to win his second successive golden boot and did so in spectacular fashion.

Kane, who has set himself the target of reaching 100 Premier League goals by the end of the 2017-18 season, made it seven in two games after his four against Leicester on Thursday.

And the England forward has done it having played just 30 games this season, after being absent with an ankle injury for seven weeks from the middle of September to early November and also a month between March and April.

“I said to retain the golden boot would be special with the injuries I’ve had, so to score 29 goals in 30 games is something I feel proud of,” he said after the game.

Kane’s first was a smartly taken individual effort, but the striker’s second was the product of a flowing team move as Tripper volleyed a superbly weighted Eric Dier ball across goal for the 23-year-old to tap in.

But Tottenham’s title challenge this season has been built on more than just Kane’s goals. Alli and Son Heung-min have both reached double figures in the league and the exceptional Christian Eriksen set up two of the seven goals to reach 15 assists for the season.

They finished as the division’s top scorers with 86 and also boasted the most frugal defence – conceding a club record low 26 goals.

Hull’s fate was already decided before their season finale, with the Tigers heading back to the Championship 12 months after they reached the top flight via the play-offs.

Hull have had more managers than away league wins since that victory over Sheffield Wednesday at Wembley, and the club’s ability to bounce straight back may well depend on whether they can keep hold of the man who was in charge when their relegation to English football’s second tier was confirmed.

Marco Silva was handed the unenviable task of taking over a Tigers side sitting bottom of the league in January but, with three games to go, looked to have secured their top-flight future before defeats by Sunderland and Crystal Palace.

The former Sporting Lisbon and Olympiakos boss is reportedly in demandand yet to decide his future at the KCOM Stadium. But whoever is in charge next season, the Tigers will have to show a lot more fight than they did on Sunday.

Hull goalkeeper David Marshall was given little protection as Alli, Wanyama and Alderweireld all found themselves unmarked when adding to Kane’s hat-trick.

Clucas was one of the Tigers’ better players and squeezed an effort past Hugo Lloris, but it was Tottenham defender Davies who scored the pick of the goals as he lashed in from outside the box.

Tottenham’s season may have ended without a trophy, but Pochettino’s men are the most successful side to have graced White Hart Lane since the Premier League began.

In fact, on eight previous occasions Spurs’ points total of 86 would have been enough for them to win the competition.

Having won 17 of their 19 home league games it was Spurs’, at times, stuttering away form that saw them unable to keep pace with champions Chelsea, but that seems to have been addressed with 13 goals in their final two games on the road.

Achieving a highest top-flight finish since 1962-63 was a fitting way for Tottenham to end their 118-year stay at the Lane, though, and Pochettino and chairman Daniel Levy’s focus now turns to whether Spurs can replicate that form at Wembley.

The Argentine, who has already said the north-London club will not compete with those offering huge wages to transfer targets, will be desperate to see the core of this young side still intact once Tottenham move into their new 61,000-seater stadium come the 2018-19 season.

Kane, Alli, Eriksen and Alderweireld’s performances against Hull will only have further enticed any interested parties, with Spurs’ challenge now to stop their top performers being lured away when Europe’s richest clubs begin to flex their financial muscles.