If anyone ever told you that being a Tottenham fan was easy I believe by law you can shoot them…. I am confident no one would have ever said it though.  I was born in 1983 and have been a fan since the mid 80’s and it has never been easy.  However the club I love is in my DNA.

It is easy being a fan when everything is going well.  Supporting the team week in and out when results are poor and its clear some, or a lot, of the players see themselves elsewhere that is the challenge.  A close friend went to Brighton today and watched us lose 3-0 after being in the crowd in the week to watch us lose 7-2 in the Champions League.  He also went to our League Cup defeat and when I asked him what he thought about things he said; “Poch is being let down by the players he put on the map, sack all the fuc**rs and play youth until we can sign and sell.”

You see in football thanks to “super clubs” and their insane wealth that whenever results do not go the way everyone expects they sack the manager and its all change.  New face, new approach and often results change and if they do not, they do it again.  They have the money in the bank to do this over and over not only in terms of hiring top managers and paying them but also in terms of recruiting players these managers want.

So I ask everyone what is the actual point in making that change?  We have a manager who has over achieved and raised our club expectations so much that our fans now believe he deserves to be sacked.  You realise where we were when he arrived?  You remember the failure that was AVB and then Sherwood?  You remember the mercenary squad that was a mess?

What makes me laugh is people point to a lack of trophies under Poch as a reason to fire him.  Are you kidding me?  How many trophies did Sherwood win?  AVB?  Redknapp?  If we were prolific in lifting trophies then I would get it however we as a club are not and it troubles me that so many people point to trophies all the time.  If that is truly the only reason you follow Tottenham what are you doing?  We all want to win things but I am not about to switch teams or lose my mind over not winning them.

I have enjoyed under Poch a transformation from a Europa league team to a Champions League team.  That is not just a “profits for ENIC” thing but that is raising the profile of the football club around the world.  We have signed record kit deals, record sponsorships and all while moving into a top stadium under Poch. 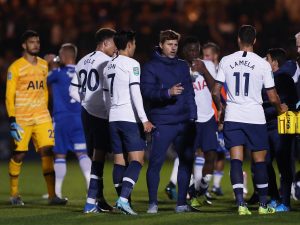 He could have easily taken a job at Manchester United or Real Madrid, we are all aware they were in for him and he turned them down to stay with us.  His loyalty however was not rewarded with the recruitment and squad changes he asked for.  When I say this I see how fast people point to this summer Ndombele signing etc however what you are missing here is our failure to move players out.

Alderweireld has been in a contract dispute for years, we signed Sanchez and so he should have been sold but we didn’t act.  Eriksen when he had two years left should have been given a sign or go; now he is running down his deal… well jogging… walking.. and add to that Vertonghen and others running down deals from further out like Wanyama, Dier etc and you have a mess.

Rumours are now flying about Harry Kane looking at his options for the summer and with that news I am about ready to put on a Dido album and drink my way through a bottle of Jack Daniels. Of course rumours like this always come up when you’re getting a hammering like us from all corners right now.

So a conclusion here is coming.  My opinion is to sack our manager would be madness.  We would not get anyone better and he has worked hard to get us to where we are with these raised expectations and deserves our support now.  As supporting a team winning is easy but right now when they really need us and times are hard is when we really need to show our support.